I love King Arthur Flour. They stock the best cooking equipment, and their flours are high quality and reliable. I also have a Pavlovian response to their cinnamon buns.

But… my appreciation is deepened every time I find valuable resources – tiny treasures for bakers – hidden in their website. Today, it was a table of how to thicken fruits for pie using flour, corn starch, tapioca, sure gel, and their branded “Pie Filling Enhancer.”

I used the table to make cherry pie filling for some cherry turnovers. And (oh darn!) I made too much and had to freeze some for pie later.

Friends, I have been way behind in relating some important news in the 2019 ReLocavore season.

First, I am sure many of you know, but if you don’t, ReLocavore and The Mister relocated. We are now back in our native turf, Southern Wisconsin. Back with quality farm land, quality farmers and quality markets. So, we re-re-located. You’ll see a definite shift in my work. First, I have lots of built-in helpers. Second, my new house has white composite marble countertops (goodbye beautiful New Hampshire granite).

Second, I have not been posting the canning inventory for 2019. Let me catch you up… 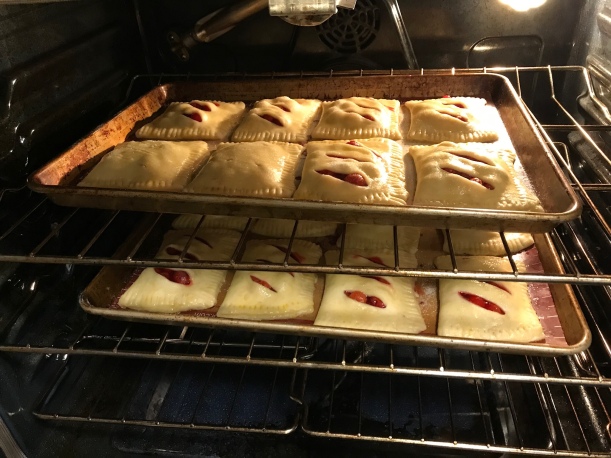 We netted 35 jars of jam from 28 cups of crushed berries, 21.5lbs of sugar, and 7 pouches of Certo pectin. I also added about a half cup of lemon juice to the recipe because the berries were very sweet. 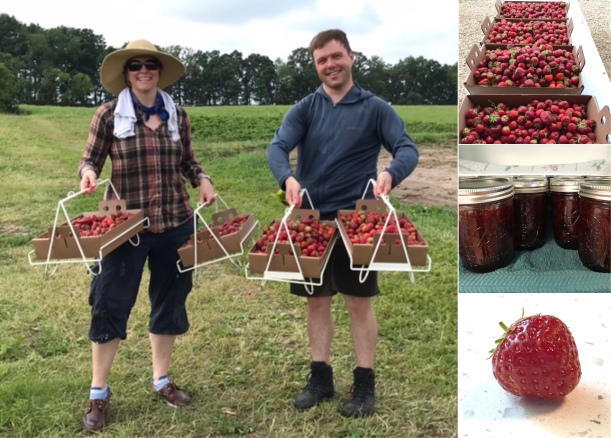 The hang weight for the hog was around 236lbs, and we know our half was 118 lbs (hang weight).

This year we split the hog with 2 other families, so this is my inventory for one quarter of a hog:

I would take pictures, but you would only see frozen hunks of meat wrapped in plastic with a label. Nothing to see here (yet).

I picked up my processed hog from Erika yesterday. We are back in Pork Season, my friends!

I caught this interesting description of Dirt Oven Cooking from Catching Fire by Richard Wrangham (not related to the Hunger Games sequel… which makes it a difficult book to find on Amazon searches.)

“…the Aranda of central Australia [way of cooking meat] involved digging a hole, filling it iwht a pile of dry wood, and topping that with large stones that did not crack when heated–often river cobblestones that had to be carried from a distance. When the stones were red-hot and fell through the fire, they were pulled out with sticks and the ashes were removed. The hot stones were then returned and covered with a layer of green leaves. Cooks liked to wrap meat in leaves to retain its juices before placing it on this layer, sometimes on top of a plant food such a roots. More green leaves and perhaps a basked mat would be laid on top, water was poured on, and some people added herbs for taste. Finally, the hole was filled with a layer of soil to retain the steam. After an hour or more–sometimes it was left overnight–the meat and vegetables would be ready and superb. The meat was laid on leave branches, carved with a stone knife, and served. The even heat and moist environment made earth ovens efficient for gelatinizing starch and other carbohydrates, and they offered effective control over the tenderness of meat. This sophisticated cooking technique doubtless increased the digestibility of the meat and plant foods” (pp124).

Should I try it out in my backyard? Anybody have some river cobblestones that I could carry from a distance? 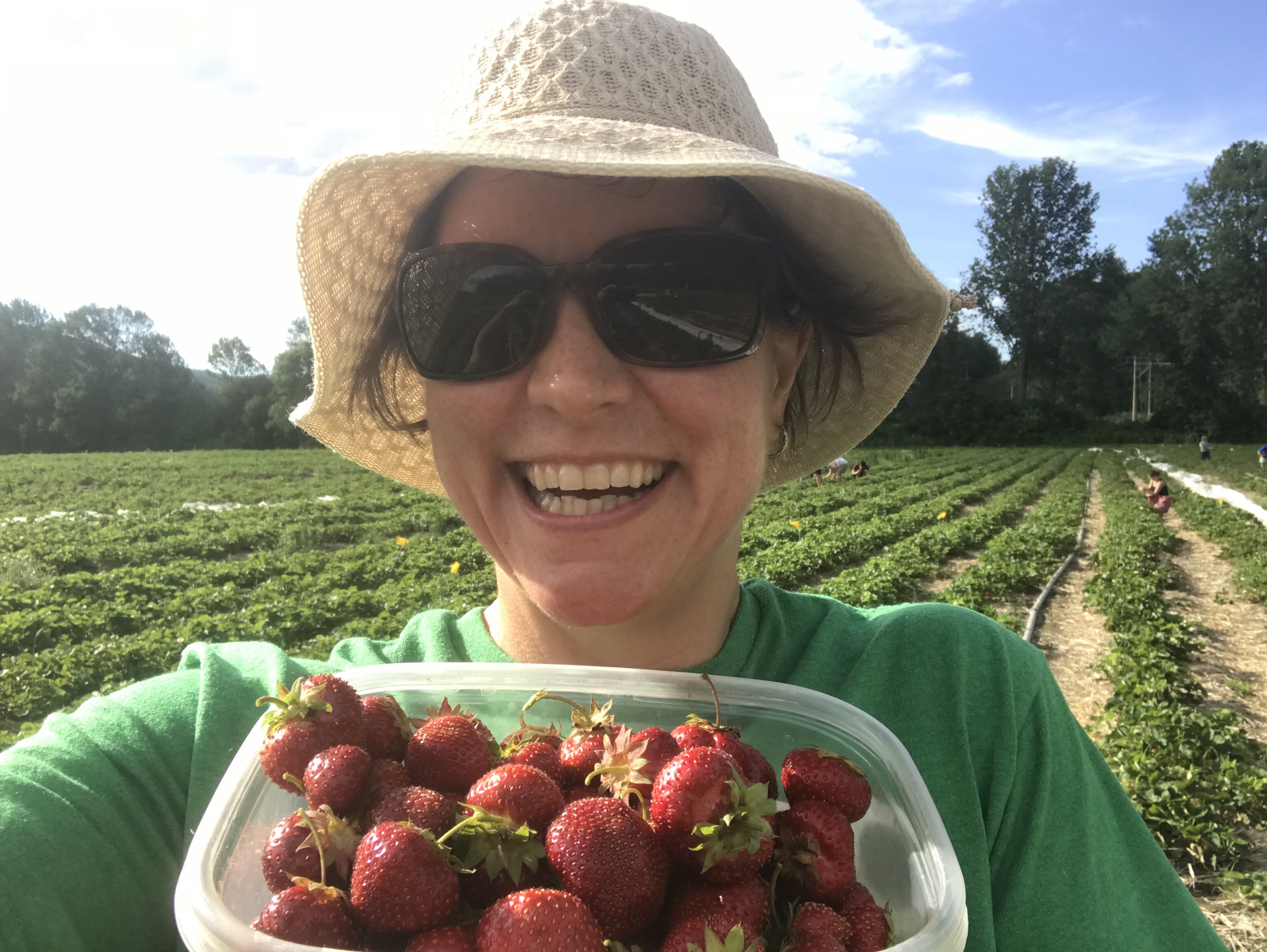 Enough with the “bone broth,” okay? It’s stock. Seriously. Bone Stock. Stock cooked to death with a little acid. Nutritionally there is almost no difference. Food people At BonAppetit and  At Epicurious, and The LA Times agree. 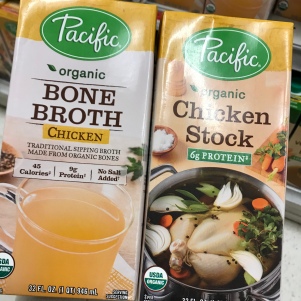 Note the list of ingredients both start with “chicken stock.” Also note the differences in sodium and protein.

You make stock and bone broth the exact same way. Jacques Pepin, who I will offer as an authority on making stock, since he is a classically trained French chef and has received many awards for his cooking. He combines 3 lbs of chicken bones to 6 quarts water (aka 12 lbs of water, because pint’s a pound the world around), for a ratio of 1 to 4 bones to water. Add spices. Cook. Skim, etc…

To make bone broth is the exact same thing. Plus a tablespoon of vinegar.

Why does “bone broth” cost $1.00 more at the store? It’s the SAME THING. In fact, it’s less of a thing, because the manufacturer doesn’t need to add any salt to it. It should be less expensive, not more.

[Warning. In some places, the following post may be describing illegal activities. Please do not engage in these activities unless they are legal in your current jurisdiction. And don’t call the cops on me, neither!]

Have you ever wanted to make bathtub moonshine? Me neither. But, I have always wanted to jack some cider.

Note. This is illegal, as best as I can tell. New Hampshire does not have a law allowing home distillation but there has been much discussion around a proposed bill in the legislature to allow home distillation. And, there is controversy whether freeze distillation is actually distillation. Without fine control, I am not separating out methanol from ethanol, etc, but merely concentrating the cider by removing water. Either way, hairs are being split and I’m being a lawbreaker here…

Sunday, I got a bee in my bonnet and decided to take advantage of the -27ºC forecasted low temperature to jack some good cider on my back porch.

I started out with approximately 120 oz of Citizen Cider, and about 90oz of Champlain Orchard. I kept back a little of the original cider for a taste test. I chose these two ciders because they were the sweetest ciders available at my COOP. I knew that jacking dry cider was a bad, bad, idea… sweeter the better. I decanted the cider into plastic food-safe jugs, shook the hell out of them to release as much of the effervescence as possible, and stuck them out on the porch to freeze. Starting temperature, -12ºC. They froze for 18 hours on the porch overnight Sunday, then came into the house on Monday morning to wait for my workday to wrap up. 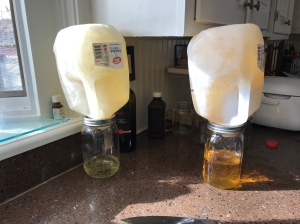 On Monday, the first freeze distillation iteration. Separating out the concentrate from the water is as simple as upending the jugs over a mason jar and catching the slow drip of concentrate. It took about an hour to drip out all of the concentrate, leaving mostly white ice inside the jugs. On the left is the Citizen and the right is Champlain. Ultimately, I ended up with a volume of about 72 oz of Citizen and 56 oz of Champlain. Overall that is a 62% of the starting volume of the Champlain, and 60% of the starting volume of the Citizen. Again, I saved 2 ounces of step 2 for taste testing later. I put the first reductions back into the food-safe plastic jugs and froze it again overnight. This time, unfortunately, it went into my freezer (set to -22ºC) because the forecast predicted a low of “only” -13.3ºC overnight.

On Tuesday, after two iterations, I am at the final Applejack. Like before, I upended the jugs on top of mason jars and let it drip down for about an hour. For the Citizen, I had a final volume of 22oz, and for the Champlain, about 16oz, for a total reduction of 18% of the starting volume remaining for both ciders. 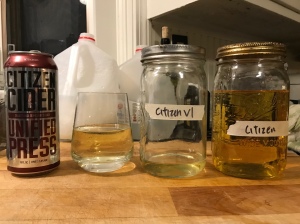 The final product for both ciders was crystal clear and much darker in color than the starting product. The effervescence in the Citizen was still a little present in the first distillation, but by the second was completely gone. The pictures above show (l to R) the original packaging, the original product, the first concentrate and the final applejack (total volume shown).

Sam and I tasted the original product, as well as the v1 distillate and the final applejack. The Champlain did not come out well. The initial cider was tart and the distillation process ended up with a harsh, metallic taste with overly tart, almost bitterness. Not good. I threw a big spoon full of my vinegar mother into it, stuck it in the back of my fermenting corner, and hope to get some rocking good apple cider vinegar. Yuck. Lemons into lemonade.

The Citizen, on the other hand, was a resounding success. I think the final product is much better than the starting cider. Citizen has a complexity, a funkyness, to their cider, that carried through nicely into the applejack. I would love to have a hydrometer right now to evaluate the ABV of the final products. However, given the very long legs on both, I suspect we hit at least 20% ABV.

Oh, come on! High school chemistry. I should be able to do this math.

ABV is just alcohol per volume. So 5% ABV means there is 5 oz of alcohol for every 100 oz of total liquid. Right? If that’s the case, then I think I can do the math. However, I have to assume that, in the freeze distillation process, I didn’t loose any alcohol in the precipitant (the ice). I don’t know if that is a reasonable assumption, but if I did loose alcohol, I think it would mean that my calculations are underestimates, not overestimates. Let’s try it!

The Citizen was labeled as 5.3% ABV and I started with about 120oz. That means there was 6.4 oz of alcohol. If I kept ALL of that alcohol, then the final product would have 6.4 oz of alcohol in the reduced volume of 22oz of total liquid, or 29% ABV. I hope Nick Scheeler is reading this and can correct my math if I am wrong here.

When are we having get together to taste the Citizen Applejack? It’s illegal to make it, not to drink it!

What else are you going to do with a 5 lb pork shoulder? Pulled pork, of course. Earlier, I used the other half of the shoulder to make carnitas. Today, I put the second pork shoulder into the slow cooker, added some onions, garlic, spices, stock and ignored it for 7 hours. Voila! Pulled Pork.

Today, we added barbecue sauce and had pulled pork sandwiches. Tomorrow, I will use more of the slow-cooked pork and the cooking liquid and beans to make a hearty pork and beans soup. I’ll probably make cornbread too. I deserve good cornbread. 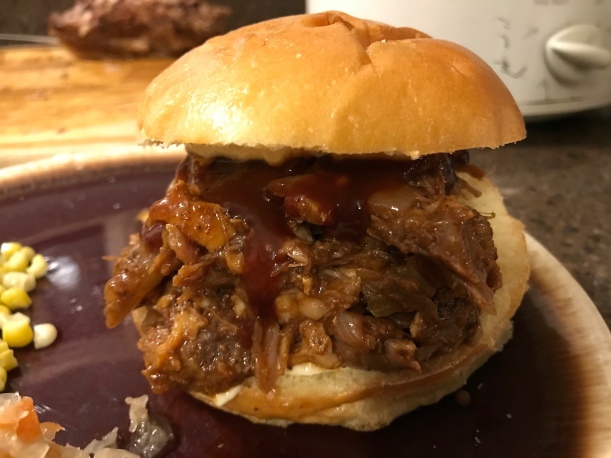