I enjoy the novelty of good road food. I rarely eat and drive-the roads in New Hampshire are too hilly and curvy. But Sam and I planned a road trip to visit his grandmother and I was anticipating 4 hours of flat, straight interstate highway driving. One of my fiend’s mom would pack up a box of these sandwiches for our drive back home after visiting. They’re ideal road food because they are small bites, don’t make a mess, and taste better after being in the car for a few hours. 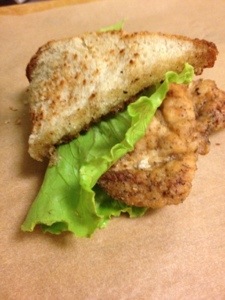 Step one. Separate the tenderloin from the breast. Cut the breast into two pieces the short way then cross cut to make four chicken cutlets.

Step two. Liberally sprinkle each side of the chicken pieces with sandwich sprinkle. Pound out the chicken cutlets until they are one quarter to an half an inch thick. Make sure that they are of uniform thickness.

Step three. Dredge the chicken pieces in a light coating of flour.

Step four. Heat a nonstick skillet over medium heat with 1 tablespoon of butter and 1 tablespoon of vegetable oil. Once the pan is hot and the butter has stopped foaming, lay three pieces of chicken into the pan and cook for 3 to 4 minutes on each side, until golden brown. Add extra butter or oil to the hand as the fat is absorbed by the cooking chicken. Set the chicken aside on paper towels to cool.

Step five. After cooking the chicken, lightly toast the bread in pan, using extra butter if needed. Cut into triangles.

Step six. Smear a bit of mayo on the bread (optional, especially if you’re not going to have a cooler to keep your food cool.) Top the bread with a slice of lettuce and a piece of chicken. Fold the bread around the chicken to make a pocket.  Wrap in wax paper and pack up for your picnic.